Beacon in the Galaxy: Scientists create a message to send into space

An international team of scientists have come together to create a message that could radiate out into the cosmos in the hopes that it will reach extraterrestrial life forms.

An international team of scientists has studied the possibility of spreading a message in Cosmos intended for any extraterrestrial life that may also be listening or searching for other life forms.

The study describes how this project, called Beacon in the Galaxy (BITG), could hypothetically establish a universal means of communicating what Earth and its inhabitants are like to all aliens in the cosmos.

“Prompted by wider inquiry, ancient scholars watched the stars swirl through the vault of night and were inevitably confronted with what is perhaps the most profound of all questions: are we alone, or are these points of light in the sky harbor others we may yet come to know” study authors wrote.

“This project, for me personally, is one of more than 20 years,” said Jonathan Jiang, study co-author and senior scientist at NASA’s Jet Propulsion Laboratory.

Jiang noted that although he is heavily involved in the BITG project, he works as an individual scientist and it is not a NASA initiative.

Jiang was first fascinated by the possibility of communicating with extraterrestrial life when he was young.

Highlighting NASA’s Pioneer 10 (1972) and 11 (1973) missions, Jiang explained that the purpose of both missions was not just deep space exploration, but potentially making contact with extraterrestrial intelligent life (ETI). Both spacecraft carried a graphic message in the form of a 6 x 9 inch gold anodized plaque bolted to the CPU. 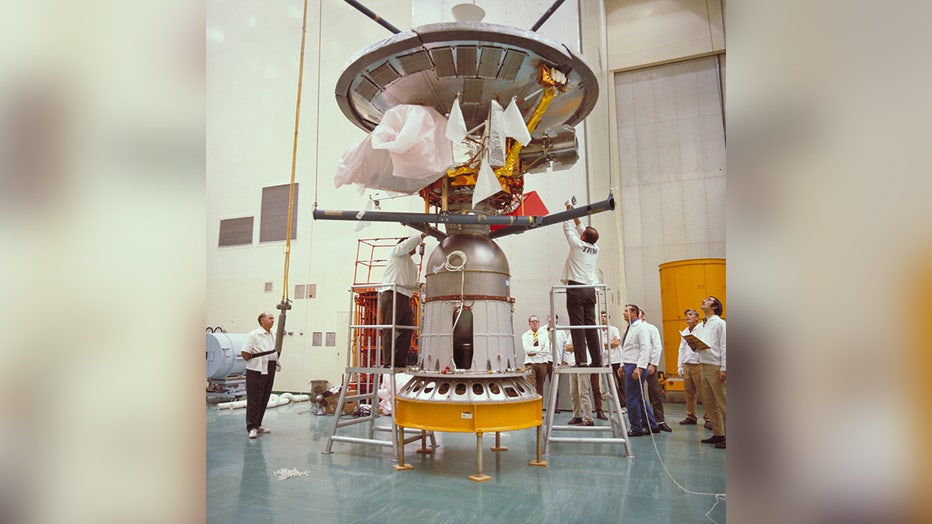 The metal plates had a time and place of origin so they could one day find their way into the hands (or tentacles) of any other astronaut in the galaxy.

While attending a conference nearly three years ago, Jiang said that the subject of sending messages into space intended for extraterrestrials had come up and he was not the only one who was fascinated. by this.

“So I said, hey, let’s do this,” Jiang said, snapping his fingers.

So he and several scientists got together to update the message coming out of the 1970s.

In 1974, the Arecibo radio telescope in Puerto Rico, which suffered significant structural damage and was finally shut down in 2020, sent the first deliberate message into space, according to SETI.

The message was broadcast as a radio signal to the globular cluster M13 about 25,000 light-years away, according to the study authors.

The message was also in binary and included the base 10 math system, the most common elements humans have, and our solar system – including the location of Earth. 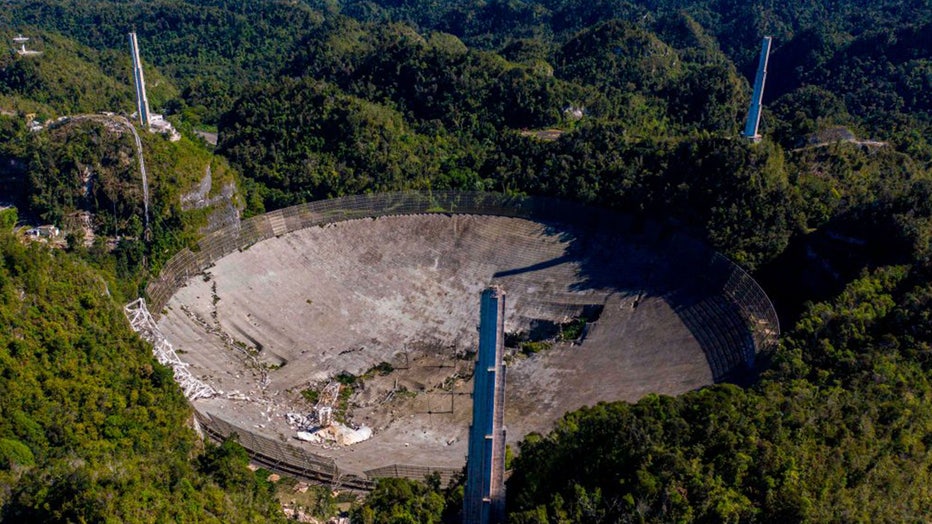 FILE – This aerial view shows the damage to the Arecibo Observatory after one of the main cables holding down the receiver broke in Arecibo, Puerto Rico on Dec. 1, 2020. (RICARDO ARDUENGO/AFP via Getty Images)

Even more recently, in 1999 and 2003, Evpatoria Transmission Messages (ETM) were sent containing “an easily distinguishable alphabet system and included an exhaustive list of our basic knowledge of mathematics and physics”, according to the ‘study.

But the most important thing about the ETMs was that they contained an invitation to respond, which the Arecibo transmission did not have.

How would the most recent message be sent? 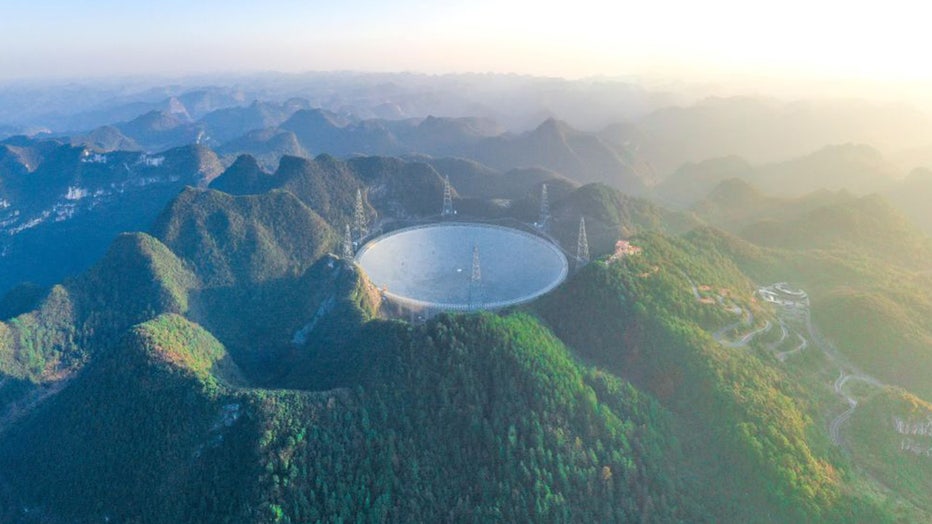 The most recent message could potentially be sent via the Five Hundred Meter Aperture Spherical Radio Telescope (“FAST”) located in southwest China.

A second option would be the SETI Institute’s Allen Telescope Array (“ATA”) in northern California, the scientists say.

However, despite these powerful tools at our disposal, scientists have said that these two telescopes can only receive radio transmissions, not transmit them.

“Both can eventually be upgraded with future enhancements that will also enable message transmission. If such a profound goal as communicating with extraterrestrial civilizations is to be achieved, the powerful tools of FAST and ATA must be paired with a equally well-designed and constructed message to convey,” the study authors suggested.

Each time these upgrades occur, scientists plan to send the message to a star cluster in the Milky Way that they believe has the highest likelihood of harboring life.

What would the whole message say?

In order to send an understandable message to extraterrestrials, scientists must consider the many differences that could arise if there were life outside our solar system.

And, the extraterrestrials probably speak a different language than what we speak on Earth and could use a completely different mathematical system than ours.

The only thing that can be universally understood, according to Jiang, is binary. 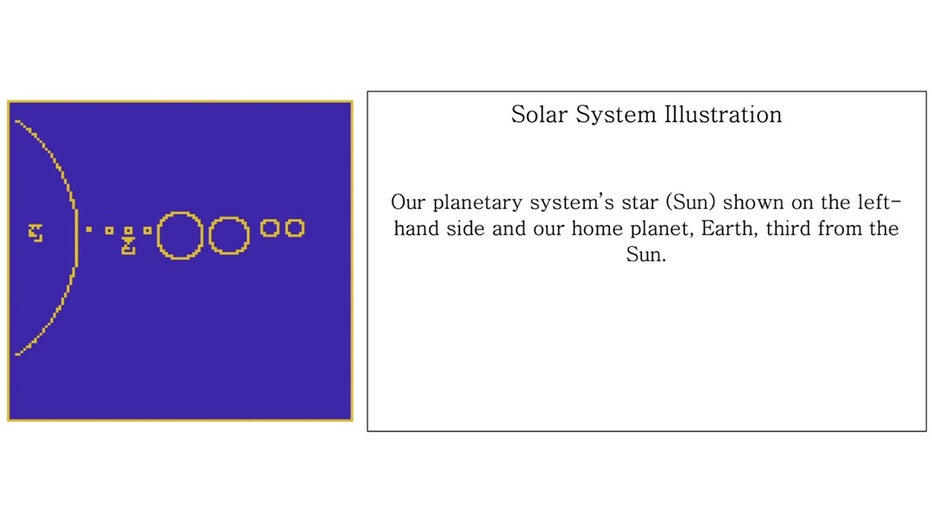 Scientists offer to get the message across binary code by radio waves to a habitable part of the Milky Way.

“The message could potentially contain coded depictions of major cultural works of art and architecture and/or images of nature such as forests, mountains, and oceans,” the authors suggested.

“There are two deep reasons for this. The first is that the definition of life is reproduction. Life continues because it is able to reproduce itself,” Jiang said. And the second reason for the images, Jiang explained, was that in 1972, when Pioneer 10 was launched, inside the spacecraft was a gold disc that had an image of a man and a woman. woman.

On the 1972 record, the man had his hand raised and the woman stood next to him with her arms down.

“The original image is of a man raising his hand. The woman is kind of obedient. We want to update that to show that man and woman are equal,” Jiang said.

So in the updated image, both the man and the woman have their hands up.

Will also be included in the message:

Scanned image of binary and decimal system. ( Lighthouse in the Galaxy Project)

“Humanity has, we believe, a compelling story to share and a desire to learn about others – and now has the means to do so,” the authors wrote.

Why we’re not sending it…yet

The scientists said they have no plans to send the updated message – not yet anyway.

The co-authors of this study agreed that humanity is not ready to send a collective message into space.

In order to send a message out into the cosmos on behalf of Earth, Jiang explained that the whole world must agree to do so, not just one institute or entity.

This could prove difficult given the state of the world as we know it now, according to Jiang and his co-authors.

And, hypothetically, if Earth can somehow agree on this one thing and we broadcast the message out into space, we have to live long enough to get a response back.

It could take tens of thousands of years to receive an answer, according to Stuart Taylor, study co-author and astrophysicist at SETI, and who knows if humans can survive that long.

“The tendency of humans to try to destroy themselves is the greatest danger,” Jiang said.

“Currently, there are many problems with mankind, and Stephen Hawking worried about whether or not we can survive another thousand years,” Jiang added.

But all is not catastrophic. Jiang and Taylor both hope this studywhich is available to the public, will inspire hope and desire to continue the work left behind. 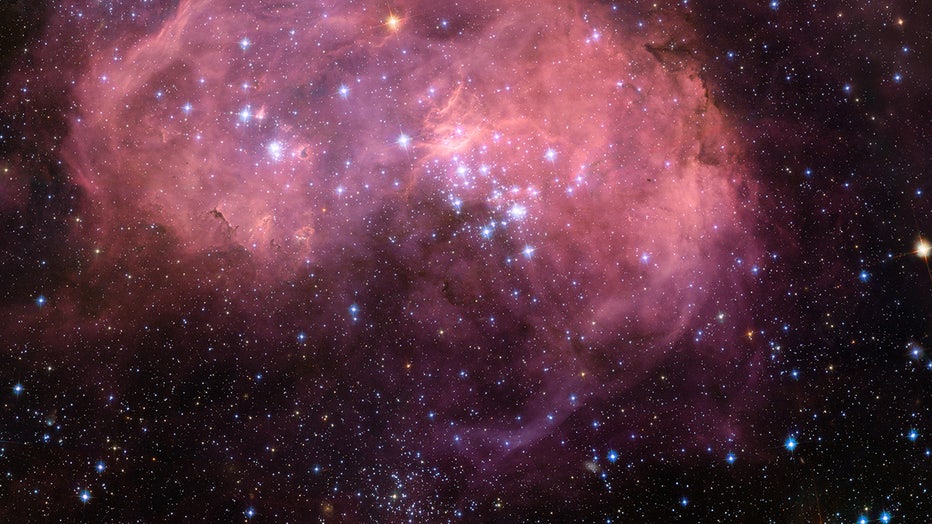 FILE – Image release 22 June 2010 A dramatic new image from NASA/ESA’s Hubble Space Telescope – one of the largest ever released of a star-forming region – highlights N11, part of a complex network of gas clouds and star clusters at our neighbors (NASA Godard)

If the message is not delivered this time, perhaps future generations will be inspired to update the message once more, and again, and again, until we reach a point as as a human species where we are willing to collectively agree to reach out to other intelligent life forms in our galaxy or beyond.

“It’s an inspiring thing to do,” Jiang said. He hopes that maybe his children’s generation will be the one to spread the word or at least spark the discussion to one day reach for the stars.

“I am happy that we have inspired these young people to reflect on this. And to inspire humanity, because remember that we are citizens of the Earth,” he added.

This story was reported in Los Angeles.